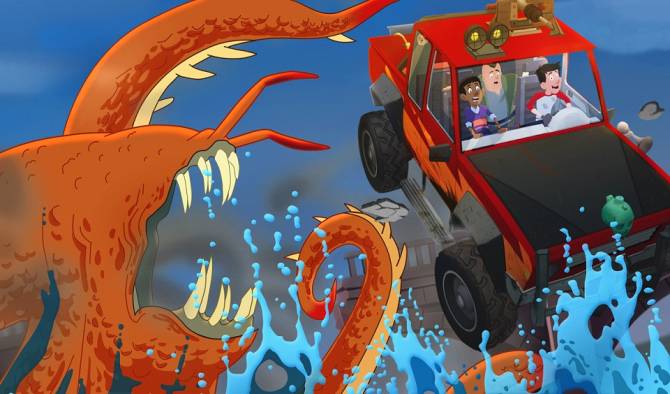 Too Much TV: Your TV Talking Points For Wednesday, April 7th, 2021

Here's everything you need to know about the world of television for Wednesday, April 7th, 2021. I'm writing this from the Twin Cities suburbs, where AllYourScreens HQ is powered by iced coffee and peeps on a stick.

My apologies for the lack of a newsletter yesterday. I am undergoing some medical stuff this week and it's making my workday a bit unpredictable. And some of the newsletter's might be shorter (and later) than normal. But things should hopefully settle down after this week.

NETFLIX FINALLY MAKES A CASE FOR INTERACTIVE PROGRAMMING
Netflix has spent a lot of time and effort over the past several years on its "interactive" programming. Which is essentially their version of a "Choose Your Own Adventure" episode, although they legally can't call it that.

But for all of their attempts, most of the interactive episodes have felt more like a curiosity than a legitimate form of entertainment. While the interactive technology is generally intuitive and reliable (excepting that horrible Bear Grylls episode), the biggest problem has been matching the interactivity to the right content. One of the best things about those old "Choose Your Adventure" books is that some of the most entertaining moments come from the many unexpected ways your character can die or face the consequences of some life-altering decision. And for better or worse, most IP owners aren't willing to sign off on a script that kills their characters multiple times.

Netflix released their latest effort yesterday and The Last Kids On Earth: Happy Apocalypse To You is the interactive episode we have all been waiting for. If you're not familiar with the animated series, it centers around a small group of kids who are living through a zombie apocalypse. It has plenty of monsters of all kinds and while there is a fair amount of danger involved in each episode, the show also a lot of wit and heart. The Last Kids On Earth doesn't take itself seriously and that makes the show the perfect platform for an interactive adventure.

The biggest change from Netflix's previous interactive episodes is that the characters in this episode can die. In fact, you'll be hard-pressed to get through the episode without killing off one or more of the characters multiple times. Various characters can get turned into zombies, forcibly turned into 2-D creature, drafted into becoming some lonely monster's surrogate baby or eaten by multiple creatures. Even better, choosing what seems to be the safest option often ends up with the entire team being killed in some randomly unexpected way. Other choices simply take you the long way around to the next challenge or back to the previous decision. And like in the "Choose Your Adventure" books, the screw-ups and missteps are half of the fun of the journey.

I don't often write what is close to being a traditional review in this newsletter. But I wanted to highlight this episode for anyone who is curious about the future of interactive programming.The Last Kids On Earth: Happy Apocalypse To You illustrates that this technology can be more than just a gimmick in the right hands. This episode is a blast to "play."

ADVENTURES IN USER INTERFACES
Roku is rapidly expanding the range of its content for the Roku Channel and in the past couple of months they've made deal to acquire content ranging from the leavings of Quibi to the complete This Old House programming library. But having all of that content doesn't help if viewers can't find it.

Looking through the Roku Channel app today, I was reminded that it doesn't have a "wish list" or "save" option. Which means that if you stumble across a program you'd like to watch later as you scroll through the dozens of genres and categories, you have to remember its there and hope you can find it again when you're ready to watch it. It's an easy fix and would help a lot with content discovery, which is the biggest challenge for any streaming service.

AND SPEAKING OF CONTENT DISCOVERY
Let's play a little game right now. Based on the demos for this newsletter, most of you are pretty wired into what is going on in the world of television. So presumably, you are the audience most likely to be aware of new programming. ABC is premiering a new scripted comedy tonight executive produced and starring Topher Grace. How many of you can name the show? Or for this newsletter's AP students, what is the premise of the show?

And that, my friends, is one of the biggest challenges of content discovery. Yes, it's been a weird pandemic-filled year and that means that the broadcast networks are suffering through some real challenges with their content pipeline. Still, so many times it feels as if these new broadcast shows are just falling in the forest without anyone even knowing they existed.

BTW, for the answer to this question, see below:

TODAY'S PREMIERES
1) Dolly Parton: A MusiCares Tribute (Netflix)
In a star-studded evening of music and memories, a community of iconic performers honor Dolly Parton as the MusiCares Person of the Year.

2) Exterminate All The Brutes (HBO)
Acclaimed filmmaker Raoul Peck presents a four-part series that provides a visually arresting journey through time, into the darkest hours of humanity. Through his personal voyage, Peck deconstructs the making and masking of history, digging deep into the exploitative and genocidal aspects of European colonialism – from America to Africa and its impact on society today – challenging the audience to re-think the very notion of how history is being written.

3) Home Economics Series Premiere (ABC)
Starring and executive produced by Topher Grace, this scripted comedy takes a look at the heartwarming yet super uncomfortable and sometimes frustrating relationship between three adult siblings: one in the 1%, one middle-class and one barely holding on. The comedy is inspired by the life of writer and executive producer Michael Colton.

4) Kung Fu Series Premiere (The CW)
A quarter-life crisis causes a young Chinese American woman, Nicky Shen (Olivia Liang), to drop out of college and go on a life-changing journey to an isolated monastery in China.  But when she returns to San Francisco, she finds her hometown is overrun with crime and corruption and her own parents Jin (Tzi Ma) and Mei-Li (Kheng Hua Tan) are at the mercy of a powerful Triad.  Nicky will rely on her tech-savvy sister Althea (Shannon Dang) and Althea’s fiancé Dennis (Tony Chung), pre-med brother Ryan (Jon Prasida), Assistant District Attorney and ex-boyfriend Evan (Gavin Stenhouse), and new love interest Henry (Eddie Liu) as well as her martial arts skills and Shaolin values to protect her community and bring criminals to justice…all while searching for the ruthless assassin who killed her Shaolin mentor Pei-Ling (Vanessa Kai) and is now targeting her.

5) Save My Skin Season Premiere (TLC)
TLC heads across the pond to the private practice of Dr. Emma Craythorne, one of England’s top dermatologists, as she diagnoses and treats patients with some of the most extreme skin conditions in the United Kingdom.

6) Snabba Cash (Netflix)
The lives of an ambitious businesswoman, a charming gang enforcer and a troubled teen collide amidst a desperate — and sinister — pursuit of wealth.

8) The Wedding Coach Series Premiere (Netflix)
Bridesmaids and in-laws and mason jars, oh my! Weddings are a beautiful cause for celebration, but planning one is far from a party. After barely making it down the aisle of her own wedding, comedian Jamie Lee is on a hilarious, heartwarming mission to help six engaged couples overcome the stressful real-life challenges that pop up before and on The Big Day.

9) This Is A Robbery: The World's Biggest Art Heist (Netflix)
In 1990, two men dressed as cops con their way into a Boston museum and steal a fortune in art. Take a deep dive into this daring and notorious crime.

AND IN CASE YOU WERE LEFT HANGING, HERE WERE TUESDAY'S PREMIERES:
1) Bannan Season Three Premiere (MHz Choice)
In this Scottish Gaelic drama, Màiri MacDonald returns home to the island she escaped eight years prior, fleeing its customs and a dysfunctional family. It turns out family ties – bannan – are enough to turn her visit into a much longer stay.

2) Chad Series Premiere (TBS)
A 14-year-old pubescent Persian boy (Nasim Pedrad) navigates his first year of high school on a mission to become popular. Chad's friendships and sanity are pushed to the limits as he uses every tactic at his disposal to befriend the cool kids, while enduring his mother's new dating life and reconciling with his cultural identity. Pedrad, who first made her mark on Saturday Night Live, is also creator, writer, executive producer and showrunner.

3) Le Petit Tour (MHz Choice)
Each episode takes viewers on a delicious culinary journey in France's Aosta Valley. Not only will the spectacular cheeses, wines, cured meats, breads, pastries and other regional products showcased in the series whet your appetite, you’ll also get to meet the producers of artisanal products who are preserving centuries-old cultural, historical and culinary traditions.

5) The Last Kids On Earth: Happy Apocalypse To You (Netflix)
Help Jack and his monster-battling friends make choices to stay alive — and have some fun — in this interactive "Last Kids on Earth" adventure.

6) Wonderland Series Premiere (MHz Choice)
In this romantic fantasy-thriller, a man from the present travels back to 1960s Biarritz and meets a mysterious woman whose destiny is inexplicably linked with his own. Starring Olga Kurylenko (Quantum of Solace, Oblivion).