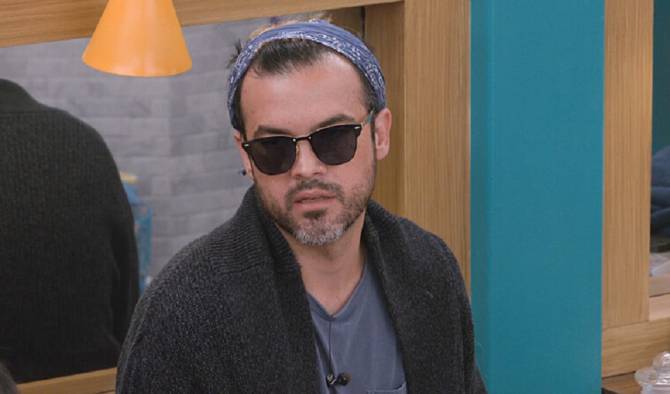 CBS! I have hope for Big Brother after all. The live feeds give me hope that it’s not going to be the season of the “Mean Girls” and “Locker Room” guys. My hopes are so high that this recap will be submitted after Thursday’s show. But let’s get to the suggestions.

Let’s say I am not surprised that Pooch is gone. In fact, I’m somewhat happy. The thing that got me was his attitude toward Julie. You should tell the contestants that Julie is their friend and to respect her. From Pooch’s attitude, he was mad that he had to leave and wanted anything but to talk to Julie. His anger comes out of being upset by being ousted by a 12-0 vote but he volunteered. Shouldn’t it be included in the show’s bible to consider that volunteering doesn’t mean you are safe? And while he talked about being friendly, he wasn’t that friendly with Taylor, now was he?

Now, I must rescind my opinion of Turner from last week. This guy is sharper than any of us, much less the other house guests, I think. He not only manages to win the HoH (Get Lit) but makes Jasmine (his bestie by default) pick the “have-nots” (Alyssa and Indy). Jasmine now has blood on her hands. That’s good CBS but did she really put up her allies? Also, could you have Jasmine lose her fake Southern accent? Most of the Southerners I know are insulted by it.

And, regarding the alliances – you really need to work with these contestants on picking “alliances names.” While they think Po Pack, Oasis, Girls Girls are great, they make no sense for the contestants. With that, the alliances show just how isolated Taylor is. She’s not part of any.
Diary Rooms are great but give us more. We don’t necessarily want reflections on what happened but what they feel and how the others are reacting. Yes, Taylor realized that she had to win and Nicole had a plan. Nicole, though, in particular, came across as a little cold-blooded and angry (as she did the entire show).

As of Sunday’s show, it appears that some of these people are growing brain cells. I just don’t understand why Nicole always comes across as loud and angry. She’s always coming across as angry. Let’s address the elephant in the room – Taylor’s treatment. While Nicole picked her as a partner, Taylor doesn’t trust her. And Turner is catching on. He sees through the girls' plan and is a little surprised by all the suggestions that Taylor is the problem but Turner hasn’t seen it.

And someone needs to teach alliances like the Girls, Girls that they need to cover their tracks more. Turner sees through it and Michael and others are wising up. Does this mean that someone in the house is actually growing some brain cells?

My production notes from Wednesday:

Daniel even in the preview is a rat. Maybe we should have seen more material on why this is the case. I hate to judge with little information (except feeds) but editing is everything. I’m quickly losing respect for Nicole who wants her partner, Taylor, to go and she is expecting a special power. Do the house guests realize that their every action and Diary Room words are edited for the casual viewers with points of view coming into play.

The Girls Girls give all sorts of reasons for getting Taylor out. Taylor’s not making friends. All of the girls want her out (with Ammeerah as the spokesperson).

Just a note: I love how Turner is processing his HoH. So far, no case of HoH-itis. He listens when people talk. He does talk to Nicole about not being his target and he’s smart and has Monte with him. Nicole’s bragging in Diary Room is showing how much she brags and she lies easily.

Taylor knows she is the target. She knows people are cold. Taylor does open up to Monte but is he seeing the real Taylor. He now knows that there were lies told about Taylor. Taylor knows they have to talk about what is happening and what needs to happen to implement change. Monte gets it – thank God, but he has seen wishy-washy before.

Monte, Kyle, Joseph, and Turner are having a meeting. Monte has a clue the girls have an alliance. This meeting starts like any other but quickly progresses to putting things together: girls working together to get the guys out, Taylor as loyal. Suddenly, they realize this is playing into Ameerah and the girls' hands. They also realize that Alyssa snitches everything the guys say to her to the girls. Ameerah is a power player. Kyle thinks they can work with Michael and Brittany and agree to include Taylor. Yes! Kyle realizes that the girls are a dragon with Ameerha in the head. And the plan is made and the troops start their mission. Kyle wants this to work. I like him so much better now.

The PoV is announced and the “bestie besties” will compete. Only three pairs will compete. The HoH and partner with Michael and Brit will be joined by one additional team – Taylor and Nicole. Nicole as always makes it about herself. She hopes someone else will win because she doesn’t want to “throw” another competition.

Nicole runs to her “friend” Daniel and is first upset that when Taylor leaves, there is no superpower for her. Turner finds them waiting in the HoH win. Nicole says the game is real and Taylor’s there and she’s not happy. Turner looks disgusted but turns it into concern. This plays into the plan to backdoor Ameerah and blame Dan and Nicole. Nicole says “I’m a competitor” and “I’m an athlete.” She doesn’t know fair play and teamwork.

Later, Nicole is crying in her bed. While talking to Daniel, realize that she’s a cold-hearted person (won’t use what I really think) and Daniel is a creep. The group thinks something has happened to her mother. When Taylor goes in to talk, with Ameerah as a witness, Taylor of course takes it the wrong way.

Taylor makes the move to comfort Nicole and goes in and basically says, do what you need to do for you. Nicole in her anger and looking for a way to get rid of Taylor takes it as she wants Nicole to leave the house. Nicole immediately goes to the bathroom and finds Daniel and tells him that Taylor was trying to make her leave. Daniel isn’t going to take it. He’s already lost one “friend” during week one who spiraled out of control (as he puts it). Taylor is passive-aggressive. (Note to Dan and Nicole: That’s the title Nicole won tonight.) He confronts Taylor and calls her manipulating. In the living room, Taylor tries to apologize but Dan’s not having it. Taylor isn’t supposed to speak to him again. The spiral that the two of you plan is against Taylor. She would have already broken if she wasn’t so sweet and strong.

To skip ahead for a minute, after the veto, the boys (except for Terrance and Dan) call a meeting. Michael, and Brit are to be included and Taylor is told to come upstairs to the HoH to talk. Instead, the group for a new alliance, “The Leftovers” (chosen by Taylor). They will support each other and the guys tell Taylor they realize that both she and Brit have been excluded. The goal of the Leftovers is to get Ameerah out of the house and then get rid of the rest of that alliance.

The veto comp has Turner and Jasmine (the HoH pair), Michael and Brit (nominees), and Taylor and Nicole. Nicole will take one for the rest to get Taylor out. While “Woodstack” takes communication skills, it doesn’t happen with Nicole. Let’s just say that by Nicole’s action, she and Taylor loses. Jasmine has a fear of heights and passes out even before she gets lifted off the ground making it so Turner and she don’t compete. Micheal and Brit win and Turner plans to take Ameerah out.

CBS, Wednesday night’s show redeemed this week. I’m sure Ameerah will have much to think on tomorrow night as I feel she leaves. I’m not sure who does the picking of contestants, but my kudos to you for picking a group like the Leftovers who “FINALLY” saw through the lies and manipulation. Tell them thanks. And for those who picked Daniel and Nicole? You need a new type of evaluation to weed this type of self-centeredness out.

Have feedback or more information about this page? Email me at This email address is being protected from spambots. You need JavaScript enabled to view it.

Also, subscribe to my free, daily Too Much TV newsletter at toomuchtv.substack.com