Detroit Tigers Statement On The Decision Not To Play Tonight's Game 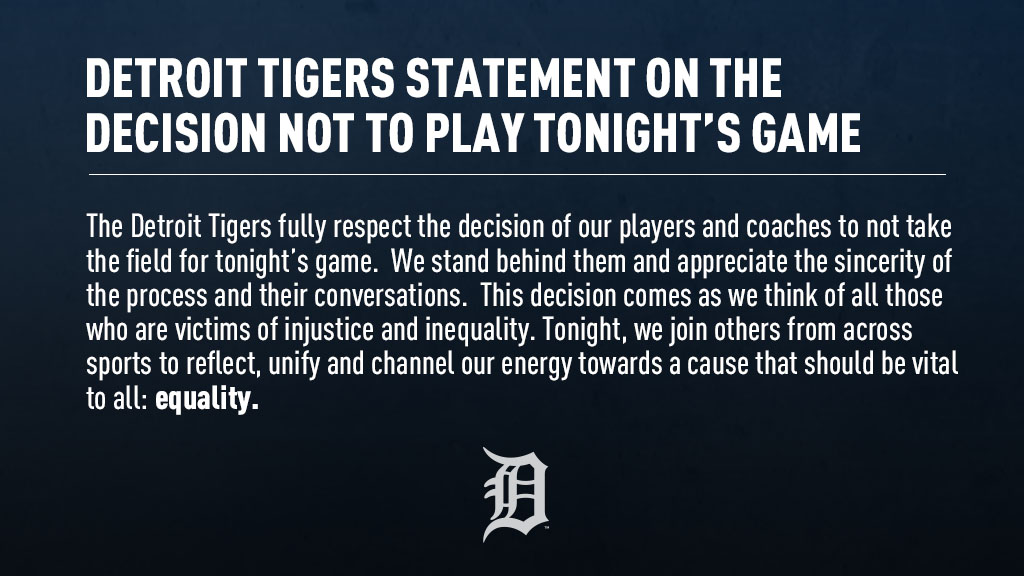 Show Guide: 'I Can See Your Voice'

Synopsis: Actress Cheryl Hines and Daytime Emmy Award-winning television host and vocalist Adrienne Bailon-Houghton, as they join Ken Jeong, a rotating panel of celebrity detectives, comprised of comedians and pop culture experts, and a musical superstar to help one contestant tell the difference between good and bad singers, without ever hearing them sing a note. With $100,000 on the line, the contestant will attempt to weed out the bad “Secret Voices” from the good, based on a series of clues, interrogation, and lip synch challenges. In the end, the singer whom the contestant picks will reveal if they are good or bad in a duet performance with the musical superstar, resulting in an amazing musical collaboration or a totally hilarious train wreck. (Courtesy Fox, 2020)

Production Credits:
The show is produced by Fox Alternative Entertainment. James McKinlay, Craig Plestis and Ken Jeong serve as executive producers. The series is based on a South Korean format from CJ ENM.

Movies And Specials: 'All Together Now'

Synopsis: Amber Appleton (Auli’i Cravalho) remains an optimist even when her personal life is far less stable than it appears on the surface. A musically gifted high school student with aspirations to attend Carnegie Mellon, Amber balances her beloved high school drama club helmed by Mr. Franks (Fred Armisen) with working long hours at a donut shop to help support herself and her down-on-her-luck single mom (Justina Machado). She also spends time at the local retirement community, giving care and attention to her favorite pessimistic resident (Carol Burnett). When new obstacles present themselves that threaten her dreams, Amber must learn to lean on the strength of her chosen family to move forward.  Directed by Brett Haley (All The Bright Places, Hearts Beat Loud) and based on Matthew Quick’s novel “Sorta Like a Rock Star”  All Together Now is a story of finding hope in the darkest of times. (Courtesy Netflix, 2020)

Production Credits:
Directed by Brett Haley (All The Bright Places, Hearts Beat Loud) and based on Matthew Quick’s novel “Sorta Like a Rock Star.”

In response to a call-to-action shared at the end of each episode last season, thousands of emails were sent in by viewers and military witnesses with personal stories and anecdotes of sightings of unexplained craft. In season two, each episode will center around a specific case or aspect of the modern UAP phenomenon and follow the credible team of connected investigators including former military intelligence official and Special Agent In-Charge, Luis Elizondo, and former Deputy Assistant Secretary of Defense and Intelligence, Chris Mellon, as they continue to divulge what the U.S. government (and other governments) know about these bizarre craft, hear additional firsthand eyewitness accounts of UAP sightings from military and civilian personnel, and share additional fact-based insight and information about these craft in an effort to produce tangible evidence and build the most indisputable case for the existence and threat of UAP ever assembled. (All photos courtesy: Damien Maloney, 2020)

Tom DeLonge takes a break to play guitar while filming

Luis Elizondo poses in his office during Season 2

DNC Final: CNN Beats All Broadcast And Cable Nets Every Night Of The DNC

CNN was #1 on all four nights of the Democratic National Convention (DNC), beating the broadcast and cable nets (NBC News, ABC News, CBS News, MSNBC and FNC) in the key demo adults 25-54 and among younger viewers 18-34.  CNN also surpassed NBC, ABC, CBS and FNC on each night of the four-night convention in total viewers.

On the fourth and final night of the DNC, CNN beat all the broadcast and cable nets in adults 25-54 and 18-34 and topped the broadcast nets and FNC in total viewers for the fourth straight night.  CNN’s digital platforms had strong numbers yesterday, as the most watched and most used news and information brand in the world.

CNN reached more viewers among both total viewers (12.7 million) and adults 25-54 (4.0 million) than any cable news network during the first three days of the DNC during the showcase 10pm hour. MSNBC followed with 11.7m/2.6m and FNC averaged 11.3m/2.6m respectively.

Competitively, CNN was the #1 digital news source on Day 3 of the 2020 DNC after outranking all other publishers on Day 1 and Day 2. CNN surpassed #2 BBC by 10 million visits on Day 3 and averaged a lead of 9 million over #2 BBC, 12 million over #3 Fox News and 23 million over #15 MSNBC in Days 1-3. CNN also outranked all key competitors in total day visits across all three days of the convention with a sum of 72 million versus BBC’s 44 million (Day 1-3 data is the most current available for daily digital competitive rankings, which is published by SimilarWeb).

CNN saw 70k users live stream the average minute of the convention programming from 9-11pm (equivalent to the way TV ratings are calculated). Digital average audience was up 18% from Day 4 of the conventions in 2016.

The audio of the convention also streamed on CNN’s channels on SiriusXM, Radio.com and TuneIn Radio.

Movies And Specials: 'The One And Only Ivan'

Synopsis: An adaptation of the award-winning book about one very special gorilla, Disney’s “The One and Only Ivan” is an unforgettable tale about the beauty of friendship, the power of visualization and the significance of the place one calls home. Ivan is a 400-pound silverback gorilla who shares a communal habitat in a suburban shopping mall with Stella the elephant, Bob the dog, and various other animals. He has few memories of the jungle where he was captured, but when a baby elephant named Ruby arrives, it touches something deep within him. Ruby is recently separated from her family in the wild, which causes him to question his life, where he comes from and where he ultimately wants to be. The heartwarming adventure, which comes to the screen in an impressive hybrid of live-action and CGI, is based on Katherine Applegate’s bestselling book, which won numerous awards upon its publication in 2013, including the Newbery Medal. (Courtesy Disney+, 2020)

Production Credits:
The One and Only Ivan is directed by Thea Sharrock from a screenplay by Mike White based on Applegate’s book and is produced by the late Allison Shearmur, Angelina Jolie and Brigham Taylor. Sue Baden-Powell and Thea Sharrock serve as executive producers.

Synopsis: The eight-part drama series is a tale of self-discovery and morality that evolves into a suspenseful thriller, following as a young stockbroker, dissatisfied with his ordinary, apathetic life, is captivated by the murky underworld of drug dealing as he seeks out his deceased father’s past.

Movies And Specials: 'Who Would You Take To A Deserted Island?'

Synopsis: In their last night living together, four roommates play a game in which a secret that will change their lives forever is revealed.

Synopsis: When a kingdom is taken over by tyrants, the deposed princess begins a quest to find a disbanded group of evil knights to help take back her realm.

Synopsis: Locals abandoned Ghost Island after multiple shipwrecks and shark attacks. Now, Dr. Craig O'Connell and his team of experts dive in to find out why the island at the edge of the Bermuda Triangle attracts so many sharks -- including the Great White. (Courtesy Discovery, 2020)