One annoying aspect of writing about the world of entertainment is that there is no shortage of dumbass, over-blown controversies. Every day brings another story or two of some perceived slight or trumped up outrage and for the most part, I just tune it all out. Because even when the issue is legitimate (and half the time, it's really just some convoluted PR stunt), no one is going to give a crap about it 24 hours from now. And I am at the point in my life when I just don't have the desire to waste precious hours of my life dissecting someone's hurt feelings based on random tweets from fans.

Still, I decided to write about this latest Taylor Swift story because it's the perfect storm of brand management. fan overreaction and a not especially funny throwaway line in a streaming series. In a better world, this is the type of story that would never get past the Taylor Swift fan group text level. But it's 2021, and there is apparently no outrage too small to ignore. So even the Hollywood Trades wade in with a story or two, because....hey, pageviews.

This tale of misplaced PR assets begins with the new Netflix series Ginny And Georgia. There is a mention of singer Taylor Swift in episode ten and here is how it is described by TV Line:

Georgia (Brianne Howey) and daughter Ginny (Antonia Gentry) get into an argument, prompting the following comeback from Ginny when Georgia comments on her daughter’s relationship status: “What do you care? You go through men faster than Taylor Swift.”

It's a throwaway line and to be honest, it's not the greatest joke in the world. Especially since the young singer/global brand has apparently been in a committed relationship for several years. Still, it doesn't seem like a big deal. And when I watched the episode maybe six weeks ago before it premiered, the line didn't even register in my consciousness.

But apparently Taylor Swift noticed, because she did what any savvy celebrity does in 2021, she cranked out an angry tweet:

Hey Ginny & Georgia, 2010 called and it wants its lazy, deeply sexist joke back. How about we stop degrading hard working women by defining this horse shit as FuNnY. Also, @netflix after Miss Americana this outfit doesn’t look cute on you. Happy Women’s History Month I guess.

Now Swift is certainly entitled to be annoyed by the joke. But given that her PR people spent years encouraging fans to breathlessly dissect her songs for hints about her love life and her every dating move was indirectly monetized, the Ginny And Georgia line might be lazy, but it's not "deeply sexist." And it certainly doesn't rise to the level required to threaten Netflix with the "hey, I let you stream a special with me. How can you treat me this way?"

And in fact, the line seems to be there to be cringy and tone-deaf. It's a bit of a cheap shot on purpose, designed to show one of the nuanced aspects of the mother/daughter relationship and how people will say things in order to seem hip or cultural aware while at the same time also showing how out of touch they really are.

But regardless of any context for the line, Swift has a core sub-group of fans who love her in the same way that Zack Snyder fans love the #SnyderCut. So her fans swarmed onto sites such as IMDB, Metacritic and Rotten Tomatoes to downvote Ginny And Georgia. Because screw all of those people who worked on the show and the year or two of hard they put into the show. All I care about is a five-second not-that-funny joke in one episode. Fuck everything else, all that matters is the supposedly hurt feelings of my favorite singer. 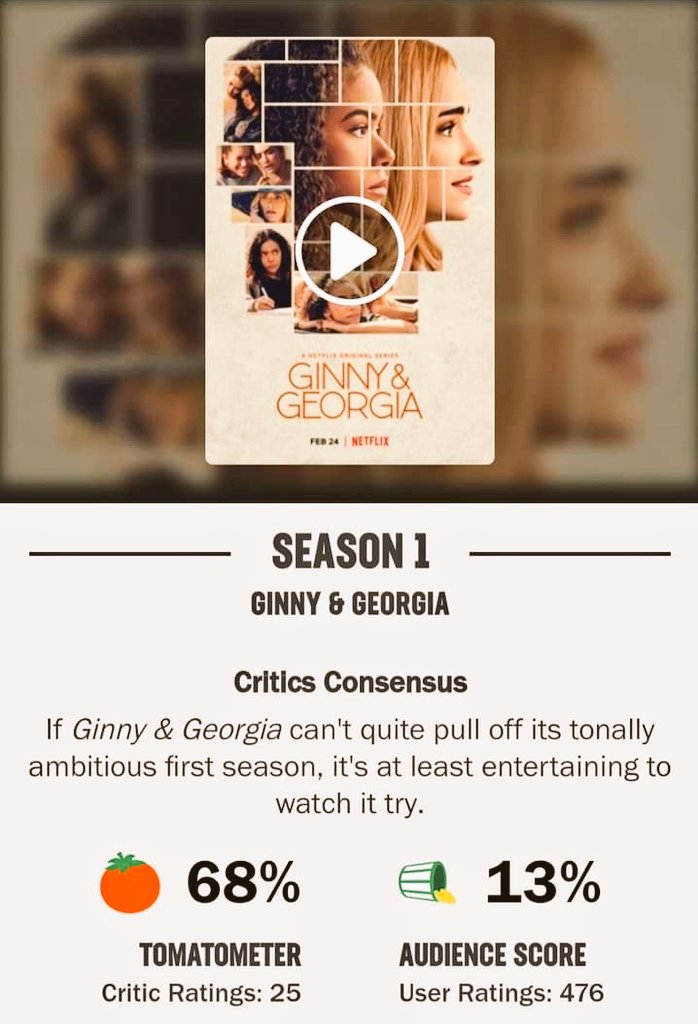 What's the point of this piece? Part of it is just ranting, because I hate this entitled, whiney fan culture. As well as celebrities who engage in this passive, aggressive brand management and PR spin through social media outlets. I really enjoy Swift's music and I look forward to what she'll do in the next few decades. But while that throwaway line might not be a highlight of Ginny And Georgia, this overblown controversy isn't going to make any of Swift's "year-in-review" highlight reels.

Have a comment? Email me at This email address is being protected from spambots. You need JavaScript enabled to view it. or follow me on Twitter at @aysrick.