Too Much TV: Your TV Talking Points For Thursday, February 24th, 2021

Here's everything you need to know about the world of television for Thursday, February 25th, 2021. I'm writing this from the Twin Cities suburbs, where AllYourScreens HQ is powered by watermelon and corn chips.

My apologies for the late newsletter today. As I mentioned a couple of weeks ago, I'm going through some medical stuff right now and while it doesn't appear to be too scary, it does screw up my daily workflow unexpectedly. Thank you all for the support.

IN DEFENSE OF BINGEING
I spend an inordinate amount of time discussing the concept of bingeing television with people. In some circles, the practice of streamers dropping an entire season of television at once is considered to be very close to a cultural crime. If you want to get a lot of traffic to a post, all that is required is to include a headline along the lines of "Hey, Bingeing Sucks."

The main argument against bingeing comes from TV industry folks, TV critics and hardcore television fans. They moan about how bingeing destroys the communal experience of the conversation that surrounds the traditional weekly episode release method. In a lot of ways, the conversation reminds me of the one that sprang up in the music industry during the evolution from album releases to being able to buy individual tracks from an album.

There certainly was something communal about the experience of hearing an entire album back-to-back in the way that the artist intended. And there are some albums that deserve that level of attention and contemplation. But it's easy to forget the old album/single purchasing method was a terrible experience most of the time for consumers. It was expensive and you often found yourself being forced to buy an entire album to get the two or three tracks you really wanted. And while music fans could rightfully argue "Sgt. Pepper's Lonely Hearts Club Band" deserved to be experienced in its entirety, I'm not sure that the album Chicago XIV deserved the same level of appreciation.

And that is my response to people who use the success of The Mandalorian or Wandavision as a rationale why all scripted television should be released on a "one-episode-per-week" basis. Those shows are the exception, not the rule. Releasing episodes once a week doesn't guarantee people who spend more time talking about the show. Otherwise, my social media feeds would be filled with conversations about the second season of Snowpiercer.

The pop culture zeitgeist only has the attention bandwidth to deal with so much bandwidth at one time. And in an industry where there are maybe a dozen potential buzzworthy shows being released each month, dropping an entire season of most of them at once gives more of them a chance to shine-even if it's for a shorter amount of time.

Releasing an entire season at once also plays to the reality of streaming television in 2021. We live in a world with a lot of media distractions. We're discovering things at different times and on a variety of unexpected platforms. Our viewing habits are defined by our friends and social media feeds as anything else. For the most part, we don't live in a pop culture world of entertainment. It's a pod culture world. More and more often, we discover a show because someone we know or follow on social media talk about. I am sure nearly all of us have suddenly had a discussion of an older show dominate our cultural pod because one person discovers it and encourages everyone else to give it a try.

Binge-releasing television plays to that time-shifted pod culture most of us live in. Yes, a traditional weekly release works for some high-profile programs with built-in fanbases. But entirely too many industry analysts and reporters confuse "how I watch TV" with the way it should work for most people.

ONE HEADS-UP ABOUT PARAMOUNT+
You've already read lots about the Paramount+ news from yesterday and I've written a bit in the past few weeks about the service. I just received a bit of a walk-through of some of the service (mostly with screenshots) under embargo. So while I cant say much for now, check back on the web site the morning of the launch and I'll have a detailed review as well as some other features. I'll also link to all of that stuff in that day's newsletter. 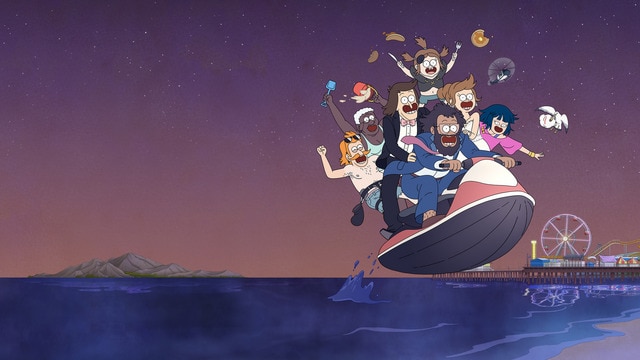 TODAY'S PREMIERES
1) A Closer Look With Eric Benet Series Premiere (ALLBLK)
A Closer Look is a music documentary series that profiles legendary and popular artists whose songs have topped the charts, re-shaped the music industry, and resonated with fans across the world. Following profiles of New Edition lead singer Ralph Tresvant and R&B crooner Brian McKnight, the third episode in the series will give fans “a closer look” at singer, songwriter Eric Benét.

2) Close Enough Season Two Premiere (HBO Max)
A couple faces various challenges as they transition from their 20s to their 30s.

3) Geez & Ann (Netflix)
A sensitive and independent girl falls for a mysterious dream boy and yearns for the one thing everyone wants in a relationship — commitment and love.

4) High Rise Invasion Series Premiere (Netflix)
A teen girl is teleported to a high-rise rooftop where she must choose between four dangerous options in a battle for her survival.

5) Luda Can't Cook Series Premiere (Discovery+)
In the one-hour special from record breaking producer Will Packer, Ludacris gets schooled in the kitchen by James Beard Award-nominated Chef Meherwan Irani to up his culinary game with international flavors and techniques. Indian cuisine is one of Luda’s favorites and Chef Irani gives him a master class in the foundations, from layering spices to frying and braising and making curry. Then in a test of his newly acquired culinary skills, he cooks and serves a menu of Indian dishes Ludacris-style to a room of VIPS, including his mom Roberta.

6) Millennials Series Premiere (ALLBLK)
This comedy follows four twentysomething roommates and their neighbor across the hall as they navigate the chaos of being young and finding success in L.A. Starring Kyle Massey (That’s So Raven), Keraun Harris (Insecure), Philip Bolden (Are We There Yet?), Aaron Grady (Everybody Hates Chris), Teresa Celeste (Wild N’ Out) and more.

7) Punky Brewster Reboot Series Premiere (Peacock)
In this continuation of the iconic 80s sitcom about a bright young girl raised by a foster dad, Punky is now a single mother of three trying to get her life back on track when she meets Izzy, a young girl in the foster system who reminds Punky a lot of her younger self.