10 Obscure Classic TV Shows You Can Watch On IMDb TV

There are niche streamers for nearly every imaginable niche, but so far no one has launched one that is devoted to the obscure and lesser known classic TV programs. There are a number of reasons for this - digitizing costs, complicated ownership issues, sync rights and more. But every time I begin to lost hope, I'm surprised to see a handful of truly offbeat programs pop up unexpectedly on some streaming service.

IMDbTV is a free, advertiser-supported streaming service that is owned by Amazon and is somewhat buried inside the innards of the world's clunkiest streaming interface: Amazon Prime Video. Like the larger Prime Video service, the search function is hit and miss and indeed the way you are most likely to run across lesser-known titles is by accident. I've found that looking at IMDbTV on a computer is a bit easier than via the Amazon Prime Video app. But just barely.

Here are some of the quirkier titles now streaming for free on IMDbTV. Some of the programs are really well made and others were just made. But regardless, if you are a fan of the golden-ish age of television, then you will find some stuff here that you won't believe:

Banacek (1972-1974) (2 Seasons)
This show aired two eight-episode seasons as part of the NBC Wednesday Night Mystery Movie anthology series. George Peppard played Thomas Banacek, a Polish American freelance insurance investigator based in Boston. He received ten percent of the value of any of the stolen goods he recovered and each episode featured him solving some seemingly impossible crime. Semi-regulars on the series included Murray Matheson, who played rare-bookstore owner and information source Felix Mulholland and Christine Belford, who was Banacek's insurance investigator rival and sometimes booty call, Carlie Kirkland.

The crime-solving parts of the show are still first-rate, but some of the early 1970s breezy attitudes towards women can be cringey at times. But it's a fun show to watch and was reasonably popular at the time. So much so that the network ordered a third season but Peppard decided against it in order to prevent his ex-wife Elizabeth Ashley from receiving a larger percentage of his earnings as part of their divorce settlement. One fun piece of trivia: the show inspired a 2018 episode of The Simpsons entitled "Home Is Where The Heart Isn't."

Tenspeed And Brown Shoe (1980)
Based strictly on the pedigree of the people behind this detective series, it should have been a huge hit. It was the first series to come from Stephen J. Cannell Productions as an independent company and Cannell was coming off a hot streak. In the previous five years, he had created the hit shows Baretta & Baa Baa Black Sheep and had co-created The Rockford Files with Roy Huggins. In fact, writer/producers Juanita Bartlett, Gordon T. Dawson both came from The Rockford Files, which has just wrapped its last episode. Co-star Ben Vereen was a well-known performer and Jeff Goldblum was two years away from career-changing roles in the movies "The Big Chill" and "The Right Stuff."

The series was about two detectives who had their own L.A. detective agency in Los Angeles. Vereen played E. L. ("Early Leroy") "Tenspeed" Turner, a hustler who for some reason I suspect isn't quite legal worked as a detective to satisfy his parole requirements. His partner Lionel "Brownshoe" Whitney (Goldblum) was a slightly wimpy accountant, who had always wanted to be a 1940s-style P.I. A running joke involved him reading a series of hardboiled fictional crime novels, written by Stephen J. Cannell. But the series never caught on, although Cannell was fond enough of the premise that he later recycled it into the much more successful Hardcastle & McCormick.

The Tim Conway Show (1980)
Ace Crawford, Private Eye (1983)
Like musicians, some comedians are just better in a group than they are in their own solo projects. That was certainly the case with Tim Conway, who found great success as part of the ensemble on shows such as McHale's Navy and The Carol Burnett Show. But his solo television projects were modest successes at best. The Tim Conway Show was the second series with that name and Conway's friends and co-workers did all they could to make it a success. Conway had recently come off of the success of the Burnett show and this variety series was produced by Burnett's husband, Joe Hamilton and like her show, featured a group of regular sketch performers and it also aired on Burnett's home network CBS. But the hour-long show was cut to 30 minutes after two months and despite adding familiar faces like fellow Burnett Show alum and comedic foil Harvey Korman, the series was gone after a season. But that's much longer than Conway's follow-up series Ace Crawford. That spoof of old film-noir detectives was pulled from the air after a month. Both shows are well worth watching if you're a Conway fan. But if you're not....viewer beware.

The David Steinberg Show (1976)
There was a time in the early-mid 1970s when Canadian comedian David Steinberg was the hottest young comic in America. He had famously helped contribute to the cancellation of the The Smothers Brothers Show by performing a mock sermon where he made fun of passages of the Bible. He was a frequent host of the ABC music series The Music Scene and in 1972 hosted a five-week summer replacement sketch comedy show. In 1975, he hosted a short-lived NBC talk show entitled Noonday. And the following year he returned to Canada to write and star in this faux talk show, which is essentially an early take on the talk show-within-a-talk show format that later became a success with The Larry Sanders Show. The ensemble included a number of familiar faces, including Martin Short, John Candy, Dave Thomas and Joe Flaherty. But while this series only lasted a season, those comedians were also working on their own series SCTV, which launched the same week as Steinberg's show and ended up running six seasons.

Decoy (1957)
The late 1950s were the heyday of the quick knock-off 30-minute cop show and most of them are forgettable. Decoy has a number of things going for it, including the fact that actress Beverly Garland was the first female lead in a television detective show. She played Patricia "Casey" Jones, a young police officer who frequently worked undercover. Given the 30-minute length, the stories aren't complicated. But Garland does a good job in the role and since the cast revolved from episode to episode and was shot in New York City..well, there is a lot of great shots of the vintage NYC street life and plenty of guest appearances by young actors on their way to better things. Guest stars include Ed Asner, Petr Falk, Larry Hagman, Suzanne Pleshette, Coleen Dewhurst and many more.

On Our Own (1977)
This one-season CBS comedy is more interesting for the cast than for what you'll see on the screen. Bess Armstrong and Lynnie Greene starred as Julia Peters and Maria Bonino, two employees in the Bedford Advertising Agency in New York City who also share an apartment. Gretchen Wyler played their boss and one of their co-workers was Dixie Carter. The show was taped live in front of a studio audience in NYC, which was unusual at the time.

While the show aired on CBS, it was produced by Time-Life Television and distributed by Warner Brothers Television. Through a series of sales, the rights are now owned by HBO, which is owned by WarnerMedia. So why isn't this series streaming on HBO Max as part of a "classic TV" vertical? This is the type of thing I find frustrating.

Women Of The House (1995)
You would think a spin-off of the very successful Designing Women would have been a slam-dunk. But the series, starring Delta Burke as her familiar character Suzanne Sugarbaker, was a creative disaster from its earliest days. Burke had finally made-up with Designing Women head Linda Bloodworth-Thomason after a very nasty public fight. But things continued to be strained between the two and the premise of the show (Suzanne's most recent husband died and she took over his Congressional seat) felt cobbled together. There is also the unfortunate fact that Burke's character worked much better as part of an ensemble that would allow her to bounce jokes off of a straight man. The show did have a stellar cast, including Teri Garr, Patricia Heaton, Jonathan Banks and the off-camera guest voice of Bill Clinton. Ratings for the show slumped pretty quickly and CBS ended up pushing the final four episodes over to Lifetime. 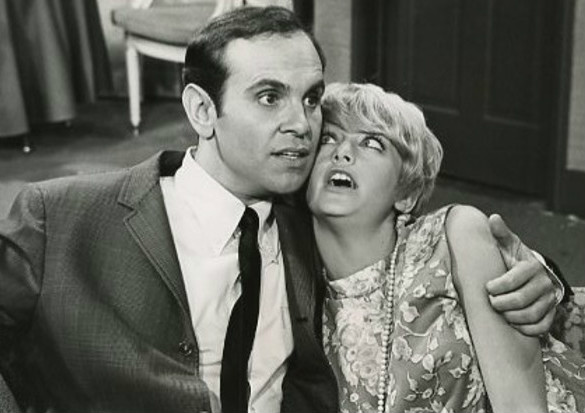 Good Morning World (1967)
Like a number of other shows on this list, this short-lived series had quite a comedy pedigree. It was created and produced by Carl Reiner, Sheldon Leonard, Bill Persky, and Sam Denoff, who in various combinations had been responsible for creating classic TV shows like The Dick Van Dyke Show, That Girl, The Danny Thomas Show, The Andy Griffith Show and Gomer Pyle U.S.M.C. The series starred Joby Baker and Ronnie Schell as Dave Lewis and Larry Clarke, morning drive time DJ's of the "Lewis and Clarke Show" on a small AM radio station in Los Angeles. Schell ended his three-year stint on Gomer Pyle to do this show (and he would return for that show's final season when this one tanked). Famed Los Angeles Dodgers broadcaster Vin Scully even did voice-over narration on some of the episodes. But despite all of the comedic talent, the end result is a show that isn't very funny. But it did include Goldie Hawn in her first television role (playing Ronnie Schell's girlfriend Sandy).