Too Much TV: Your TV Talking Points For Friday, November 20th, 2020

Here's everything you need to know about the world of television for Friday, November 20th, 2020. I'm writing this from the Twin Cities suburbs, where AllYourScreens HQ is powered by Manwich and a Mandarin soda.

A LITTLE BIT OF NEWS ABOUT DISCOVERY+
Matthew Keys has a bit of info on the upcoming Discovery+ streaming service, along with a suggested price. According to Keys, the service will cost $5 a month for an ad-supported version and $8 a month for an ad-free version. Although it's worth noting that the screenshots he posted show a price of $4.99 and $6.99, respectively. The screenshots come from a FAQ section, so there isn't any real sense of what the interface will look like. Although apparently users will be able to create up to five profiles per account.

I do know that an early proposal for Discovery+ including a suite of "channels," ala what NBCU has done with Peacock and Roku has added to its Roku channel. There would have been channels that were essentially complimentary to each of their linear channels, featuring older programs. But they would be branded with unique names, in order to keep their cable partners happy and to not confuse users. One longer term plan would have been to fold the streaming service Food Network Kitchen into those channels after a current marketing deal with Amazon expires. I was told at the time that the idea was moving forward, due to the enormous amount of work that would be required to integrate it into the Discovery+ offering.

PLAY CHESS WITH BETH HARMON FROM 'THE QUEEN'S GAMBIT'
Chess.com has some bots that allow you to play against virtual versions of well-known chess champions. But they've just launched a really fun bot that allows players to compete against a virtual Beth Harmon from the Netflix series The Queen's Gambit. The bots are Beth at seven different ages: 8, 9, 10, 15, 17, 21.

LOTS OF STREAMING NEWS
We're all familiar with the Friday news dump, but there has been a flurry of streaming industry news this morning. As has been rumored for a couple of week, the Eddie Murphy movie "Coming To America 2" is headed to Amazon in March 2021. Cinemark is giving the Netflix movie Christmas Chronicles 2 a one-week run before it begins streaming. And Deadline is reporting that Disney is considering moving some of its upcoming tentpole movies to Disney+. It's been a crazy and disruptive week.

SOMEONE DIED, BUT THERE'S AN EMBARGO ON THE NEWS
Wall Street Journal media reporter Joe Flint tweeted this morning that he has received an obituary notice that came with an embargo, which he described as a "first." I received the same one and to be honest, if I was going to write about it, I would have ignored the embargo. The death happened a week ago and sending out a proactive embargo on a news event isn't the way these things work.

But Flint also said part of the reason for people asking for embargos like this is that "because certain trade writers are so used to getting everything under embargo that a bio and background on said person was given out so everyone had a level playing field etc. Of course I don't think anyone is obligated to actually agree to such a thing for someone dead a week."

That prompted a response from The Hollywood Reporter's West Coast TV Editor:

Now if you're not an entertainment reporter, you might think the idea of putting an embargo on an obituary is just nuts. But many reporters - especially those working at the Hollywood Trades are so accustomed to news being spoon-fed to them in a transactional manner that they just consider that process the "norm." This isn't to say that they aren't good journalists. It just means that working at a publication that still has an out-sized amount of clout has made them complacent and comfortable. 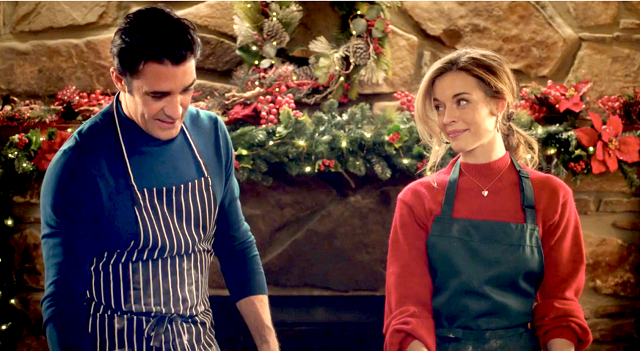 1) Alien Xmas (Netflix)
When a race of kleptomaniac aliens attempts to steal Earth's gravity in order to more easily take everything on the planet, only the gift-giving spirit of Christmas and a small alien named X can save the world.

2) Animaniacs Reboot Series Premiere (Hulu)
They’re back! Warner brothers, Yakko and Wakko, and the Warner sister Dot, have a great time wreaking havoc and mayhem in the lives of everyone they meet. After returning to their beloved home, the Warner Bros. water tower, the Animaniacs waste no time in causing chaos and comic confusion as they run loose through the studio, turning the world into their personal playground. Joining Yakko, Wakko and Dot, fan-favorite characters Pinky and the Brain will also return to continue their quest for world domination.

3) A Taste Of Christmas (Lifetime)
For Natalie and handsome Chef Stefano, setbacks at their new Italian restaurant become opportunities in disguise in this saucy movie that brings together two-holiday classics: love and lasagna.

4) Donbass (Film Movement Plus)
In the Donbass, a region of Eastern Ukraine, society begins to degrade as the effects of propaganda and manipulation take effect amidst such turbulent times.

5) Flavorful Origins Gansu Cuisine (Netflix)
From lamb skewers to the glutenous niang pi, the cuisines of Gansu province offer remarkable flavors as layered as its history.

7) If Anything Happens I Love You (Netflix)
In the aftermath of tragedy, two grieving parents journey through an emotional void as they mourn the loss of a child in this beautifully illustrated animated short film.

8) Life After Lockup Season Premiere (WEtv)
People are still living...after being in jail.

9) Marvel's 616 Series Premiere (Disney+)
This new series explores Marvel’s rich legacy of pioneering characters, creators and storytelling to reflect the world outside your window. Each documentary, helmed by a unique filmmaker, showcases the intersections of storytelling, pop culture, and fandom within the Marvel Universe. Episodes in this anthology series will cover topics including Marvel’s world- spanning artists, the trailblazing women of Marvel Comics, discovering the “forgotten” characters of Marvel, and much more.

10) Run (Hulu)
They say you can never escape a mother’s love… but for Chloe, that’s not a comfort — it’s a threat. There’s something unnatural, even sinister about the relationship between Chloe (newcomer Kiera Allen) and her mom, Diane (Sarah Paulson). Diane has raised her daughter in total isolation, controlling every move she’s made since birth, and there are secrets that Chloe’s only beginning to grasp. From the visionary writers, producers and director of the breakout film Searching, comes a suspense thriller that shows that when mom gets a little too close, you need to RUN.

11) The Real Right Stuff (Disney+)
This special tells the remarkable true story of the nation’s first astronauts, the original Mercury 7, and pulls from hundreds of hours of archival film and radio broadcasts, interviews, home movies and other rare and never-before-seen material to catapult viewers back to the late 1950s. The two-hour documentary, from National Geographic, complements the Disney+ original scripted series “The Right Stuff” which will premiere its season finale on the same day.

12) Voices Of Fire Series Premiere
This docuseries follows Pharrell Williams' hometown church as it builds the world’s best gospel choir with undiscovered talent in the community.