We live in stressful times right now and while I enjoy a challenging and dark drama as much as the next nihilist, there are times when you just want to watch some television that washes over you like a warm summer breeze. Television that is free from snark and almost guaranteed to wrap you up in their innocent joy like a warm blanket.

Here are five television shows and specials I've been watching on those late nights when I need to stop worrying about the future for a few minutes. It's a cliche to say that television is an escape. But when I watch these shows, I feel just a bit less like I'm living through an unpredictable pandemic and an election that is literally the most important one of my life.

1) "Home Town" (HGTV)
I'm not going to mention any names, but there are some home makeover/remodeling/renovation shows that come across more as exercises in brand management than shows featuring likable, relatable people. I realize that on some level everyone is doing a television show to make money. But I don't want to feel as if the hosts are mentally counting up their money in every scene. I prefer a bit of down home honesty with my renovation tips and that's one reason why I instantly fell in love with Home Town when it premiered three years ago.

Ben and Erin Napier are college sweethearts who live in smallish Laurel, Mississippi. They were discovered when "Southern Weddings" did a feature on Erin and the 1925 Craftsman home she renovated with Ben. An executive began following her on Instagram and eventually asked if the couple would be interested in being on television. And if you wonder why the executive was so interested, you just have to read this paragraph from the interview:

If I’m awake first, I go start his coffee. I’ve got to have a real Coke first thing when I wake up, but he’s very attached to his coffee. He swears nothing makes him feel more loved and it’s an easy thing for me to do for him. He runs a bath for me every night before bed, always.

Home Town is unlike any other remodeling series on the air. Maybe it's because the couple don't have a traditional background in flipping houses and running a massive home design business. But their projects are always personal and grounded in the community of Laurel. It's rare to hear an HGTV host admit that they don't particularly care for open concept houses. And it's even rarer to find hosts who have such a strong connection to the people whose houses they renovate.

For me, the best part of the show is the relationship between Ben and Erin. It's not that they're obviously in love (although they are) or that they have skills that compliment each other. It's that their relationship mirrors the one I have with my wife. Their on-the-fly interview segments are hilarious, as Ben cracks word puns and Dad jokes while Erin generally just rolls her eyes and laughs at him. Every time that happens, my wife and I glance and each other and chuckle. Those moments in the show seem unstructured and real and it makes the show a delight to watch.

2) "Restaurants On The Edge" (Netflix)
I enjoy Gordon Ramsay and obviously he's a talented chef and successful restaurant owner. But as much as enjoy the format of restaurant makeover shows such as "48 Hours To Hell & Back," I find myself increasingly unwilling to deal with all the yelling and confrontation that is the hallmark of the show. Even Robert Irvine's slightly gentler Restaurant Impossible just seems too aggressive to watch right now.

Which is why I'm a big fan of the Canadian series "Restaurants On The Edge," which just premiered its second season on Netflix. The show stars chef Dennis Prescott, restaurateur Nick Liberato and interior designer Karin Bohn and in each episode they travel to some troubled restaurant that is located in some exotic location. The short explanation is that they are focusing on restaurants that despite having a great location are still struggling to survive.

There's a lot to like about the show. Nearly all of the restaurants featured are these incredibly small, family-owned places that you likely wouldn't even notice if you walked past them. The restaurants are typically family-owned and if they have one thing in common is that most of the menus don't reflect the fresh food options available locally. The trio do a complete makeover of the struggling business, changing the menu, the decor and often the mindset of the owners. But the changes don't come as a result of confrontation, they come from speaking honestly to the owners to determine what works best for everyone. "Restaurants On The Edge" is the gentle makeover show we're all looking for right now. 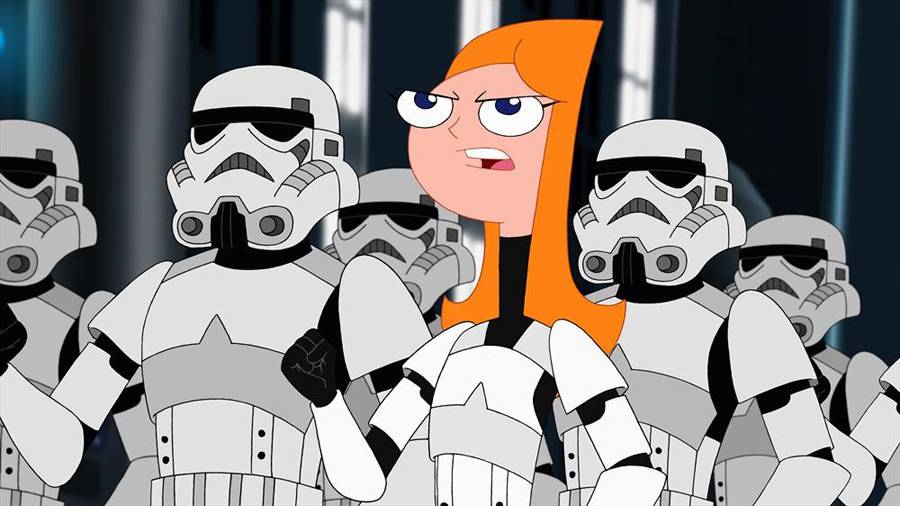 3) "Phineas & Ferb: May The Ferb Be With You" (Disney+)
TV crossover episodes or ones that mash together a couple of familiar franchises are often more interesting in theory than when the finalized version hits the screen. It's difficult to find the right balance between the characters and to keep the best aspects of each show intact while still fully integrating everything together. This special is a parallel telling of many of the events from the original "Star Wars" films, using a combination of familiar "Star Wars" characters as well as all of the Phineas and Ferb favorites. The result is a show that plays less like a promotional stunt and more like what the film might have looked like if it had been originally produced by Disney as an animated film.

Phineas and Ferb are youngsters on the desert planet Tatooine and they're friends with Luke, who seems to spend a lot of time gazing off into the distance. Any worries Phineas and Ferb fans might have about the special will likely end early on when they hear the duo singing "We love Tattooine," a hilarious number that somehow manages to be catchy while still referencing a basket full of familiar movie facts.

I won't spoil the film by talking too much about the plot. But Candace is there (aided by Baljeet and Buford) as a junior stormtrooper trying to "bust" the rebels. Isabella is the captain of the Centennial Chihuahua and she also happens to have a rivalry going with Hans Solo. And let's not forget Darth Doofenshmirtz, who claims to have come up with the original plans for the Death Star. Although he had originally planned for it to be a handheld nutcracker.

Phineas And Ferb Star Wars retains the best of Phineas And Ferb while including an impressively funny collection of "Star Wars" references, inside jokes and facts that only a hardcore fan might catch. Two of my favorites include a mention of the hated Jar Jar Binks ("You can't blame him, he's been retired for like, 20 years"), to a nod from a scene in the original movie where a man falls out of the bottom of the Death Star. It's all good fun and the jokes are respectful of both properties while still tweaking the expectations of fans.

The "Star Wars" universe isn't known for being particularly funny, but "May The Ferb Be With You" is an illustration of why there should be more of these very funny romps through the canon. It's a blast to watch and that damn earcandy of a tune "We Love Tatooine" will be stuck in your mind for days.

4) "Saved By The Barn" (Animal Planet)
You know a show is worth watching when it gets you to care about a subject that you wouldn't ordinarily give a second thought. I can honestly admit that I don't think I ever considered the possibility that there are sanctuaries for rescued farm animals. And yet that's the premise of Saved By The Barn and from the first episode I've been all in.

The show centers around the story of Dan McKernan, who picked up from his six-figure tech job in Austin, TX and left it all behind to take over his family’s 140-year-old farm in Michigan and transform it into the "Barn Sanctuary." There aren't any big confrontations on the show and often the storyline is along the lines of "we have to put sunscreen on the ears of our rescue pigs." But McKernan and his staff are so earnest and the animals so cute and compelling that you won't mind the lack of action. Instead, you'll just binge a bunch of episodes of the show, letting the good vibrations roll over you like a warm ocean breeze. 5) "Escape To The Country" (Amazon, Dabl)
I know the long-running House Hunters series is amazingly popular, but I find that a little of the show goes a long way. Every episode is structured and plays out in the same way, whether it takes place in San Diego or a small town in Spain. The house hunters are often clueless and for a lack of a better description - so American.

Escape To The Country has been airing on BBC One during the day for twenty seasons and it is everything you love about British reality shows. The current iteration of the series follows a couple who are looking for a place away from the hustle and bustle of the city. One of the show's rotating hosts give the couple of two places they chose from reality listings as well as one "mystery pick" the hosts thinks they might like despite having some disqualifying feature.

Aside from the gentle tone of the show, getting the chance to see some of the rural beauty of the U.K. is one of the show's biggest treats. The couples explore the area around each potential home and you get a real sense of what it might be like to live in that secluded community. It's also fascinating to see these classic country homes, some of them hundreds of years old. They are often quirky & distinctive to the point of unsettling. But unlike the American couples of "House Hunters," these potential home buyers aren't looking at the old homes and complaining that the prefer an open concept in the kitchen.

I wish Amazon Prime had more than a single season of the show, but you can also see additional seasons on the over-the-air digital lifestyle network Dabl.