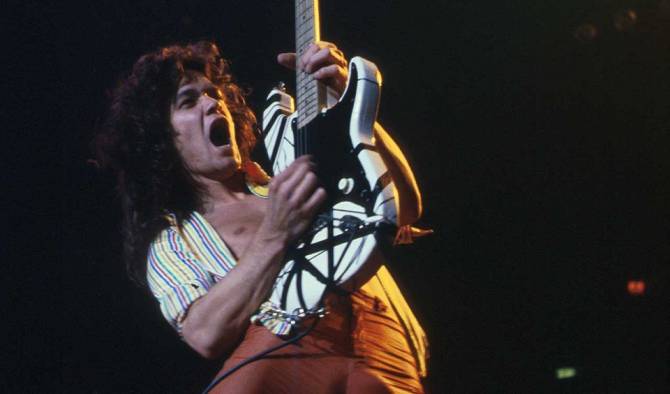 Eddie Van Halen, the guitar hero who helped give Van Halen its name and sound, died Tuesday after a long battle with throat cancer. He was 65.

"I can't believe I'm having to write this, but my father, Edward Lodewijk Van Halen, lost his long and arduous battle with cancer this morning.

He was the best father I could ever ask for. Every moment I shared on and off stage with him was a gift.

My heart is broken and I don't think I'll ever fully recover from this loss.

I love you so much, Pop.

Born in Amsterdam in 1955, Eddie Van Halen's father was a Dutch musician and his mother an immigrant from the Indonesian island of Java. His family moved to the United States in 1982 and settled in Pasadena, California. Both Eddie and his older brother Alex took up piano lessons beginning when they were children. But as he later described it in interviews, as he entered his teens he became bored with the piano. So Alex began playing guitar and Eddie took up the drums. But Eddie quickly switched to guitar and he and his brother started their first band when he was in fourth grade.

Eddie and Alex Van Halen founded a band in 1972 that would two years later become Van Halen. After becoming a well-known fixture on the L.A. club circuit, they were signed by Warner Brothers records in 1977.

Their self-titled debut album was a Top 20 album and spawned the hit "Runnin' With The Devil." By the mid-1980s, the band was ubiquitous on MTV and their 1984 album sold more than five million copies and included the band's only #1 hit, "Jump." The band's well-known turmoil and changes of lead singers didn't stop the band from continuing to tour and the band released their last album of original material in 2012. "A Different Kind Of Truth" hit #2 on the U.S. album charts and was a Top Ten album across most of the world.

Like a lot of his rock contemporaries, Eddie Van Halen's personal life was tumultuous at times. He began drinking and smoking at age 12 and said in numerous interviews that by the time he began to find professional success, he needed alcohol to get through the day. He reportedly had been sober since 2008.

Van Halen was married once, to actress Valerie Bertinelli in 1981. They had one son, Wolfgang. Bertinelli filed for divorce in 2005 after the couple had been separated for four years.

He had battled health issues in recent years. Van Halen underwent hip replacement surgery in November 1999 and underwent treatment for tongue cancer in 2000. That led to surgery which removed about a third of his tongue, but he was eventually declared cancer-free two years later. Cancer reportedly returned about five years and it ultimately claimed his life.